By the Regents of the University of the State of New York.

Whereas the Trustees of Geneva Academy did by their petition presented to us, on the eleventh day of February, one thousand eight hundred and twenty-two, represent among other things, that they were desirous of founding a College by ingrafting the same on the said Academy at or near the site of said Academy in the Village of Geneva, in the County of Ontario, and that for the accomplishment of that object they had provided considerable funds, and were about providing more for the same purpose; and thereupon praying for a grant from us the said Regents of “College powers to take effect at the expiration of three years thereafter, provided the said petitioners should within that period acquire such permanent funds as we should deem sufficient for the endowment of such College.” And whereas after due consideration of the said petition and the object therein prayed for, we did, on the tenth day of April, in the year of our Lord, one thousand eight hundred and twenty-two under and in pursuance of the Sixth Section of the Act entitled, “An act relative to the University,” passed April 5, 1813 signify our approbation of the plan, on which it was intended to found said College, and did thereupon ordain and declare that if the said petitioners should within the space of three years thereafter provide and satisfactorily secure permanent funds for the use and benefit of such College, which should produce a clear annual revenue of four thousand dollars, they the said petitioners should, on exhibiting evidence satisfactory to us of their having provided and secured such funds, be thereupon incorporated by us as a College according to the Laws of the State and the regulations of us the said Regents. And whereas now at this day, to wit, on the eighth day of February, in the year one thousand eight hundred and twenty-five, the said Trustees have by their petition to us represented that they have fulfilled the conditions on which they were, by our said ordinance in that behalf made as aforesaid, to be incorporated as a College, thereupon praying to be so incorporated by us accordingly; and for that purpose have signified to us that the name of said College shall be, “Geneva College,” and have proposed to us the twenty-four persons hereinafter named for the first Trustees thereof. And whereas it satisfactorily appears to us, that funds have been provided and set apart for the endowment and support of said College to the amount of sixty thousand dollars and upwards, producing a clear annual revenue of four thousand dollars and upwards; which said funds appear to us to be secured in as safe and sufficient a manner as can reasonably be required. And whereas it appears to us that the establishment of said College as prayed for by the said petitioners will promote the cause of science and redound to the public good; and the same being in fulfillment of the aforesaid ordinance heretofore made by us,

That the said Trustees shall and may have a common seal under which they shall and may pass all grants, diplomas, and all other writings whatsoever, requisite or convenient to pass under such seal, and which shall be engraven in such form and with such devices and inscription as shall be agreed upon by the said Trustees, and to alter the same at their pleasure.

In testimony whereof, we have caused these presents to be signed by our Chancellor, and our common seal to be affixed thereto this eighth day of February in the year of our Lord one thousand eight hundred and twenty-five. 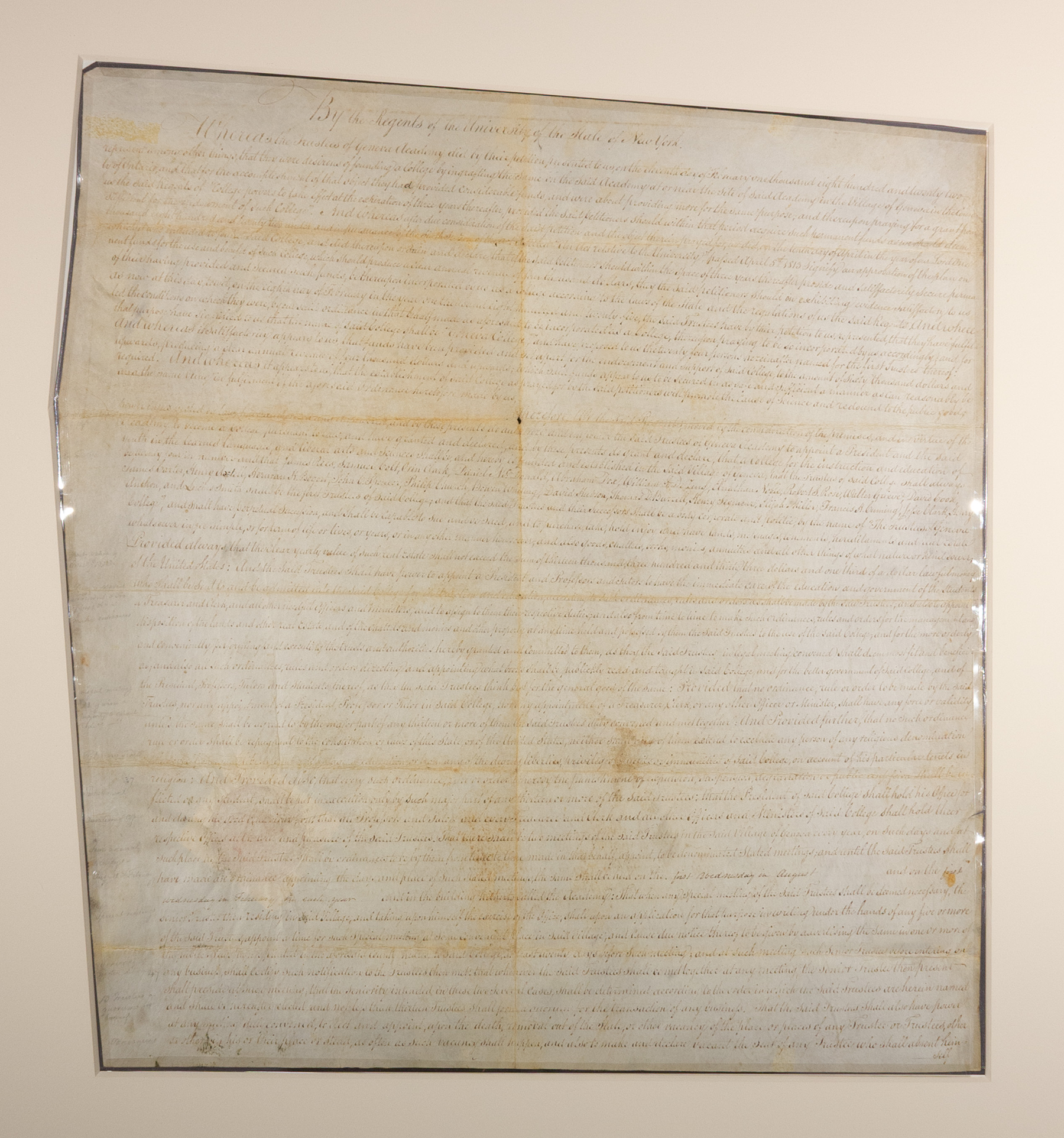 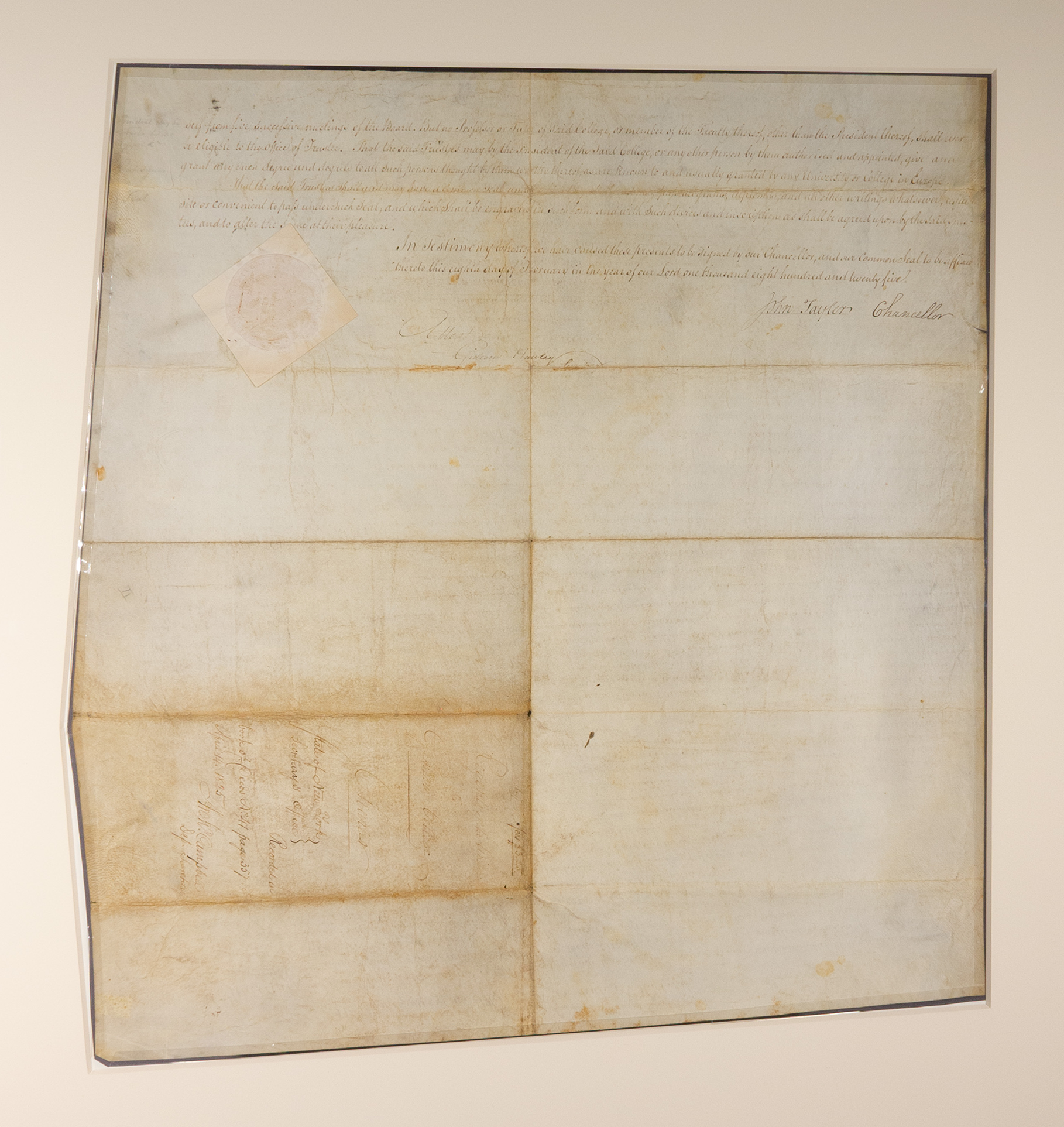