Now Therefore, to carry out such intention, and in consideration of One Dollar to him paid, and of other good and valuable considerations, the said William Smith does hereby sell, assign, grant and convey to Hobart College (but with the exceptions, reservations, conditions and limitations hereinafter stated) the property and estate, real and personal, briefly described in the annexed list marked “Schedule A”.

And the said Hobart College covenants to use prior to July 1st, 1908, from the avails of the property in “Schedule A” so assigned and transferred to it, not more than the sum of One Hundred Thirty-five Thousand Dollars ($135,000) in buildings, furniture, equipment, and such other expenses and disbursements as may be necessary for the said William Smith School for Women upon the property lately purchased for said school of the estate of the late Caroline L. Patterson (including the purchase price of said Patterson property); the same to be expended from the principal of the fund so transferred, as near as may be according to the estimate in “Schedule B” hereto annexed. And said Hobart College also covenants to pay, assign and transfer to said William Smith, all the income of the remainder of the personal estate so transferred to be received or collected up to July 1st, 1908, or until his death if it occurs prior thereto, except such expenses as shall be necessarily incurred by Hobart College in inaugurating the school and caring for the fund and property up to July 1st, 1908. From and after July 1st, 1908, or from the death of said William Smith if it occurs prior thereto, the income of the entire property, real and personal, so transferred, up to the amount of Fifteen Thousand Dollars ($15,000) per year shall belong to said Hobart College for its use and the use of said school, and shall be used by it, as near as may be, for such purposes as are provided in “Schedule C” hereto annexed; and all the net income of said fund in excess of said sum of Fifteen Thousand Dollars ($15,000) per year shall be paid by said Hobart College to William Smith during his lifetime.

The said William Smith further covenants that he will forthwith make his last Will and Testament, devising and bequeathing to said Hobart College, for its use and the use of said school, his entire estate, except such other bequests as he shall desire to make out of the property remaining in his hands.

And the said Hobart College covenants on its part that it will receive and properly care for the fund so given to it, whether by deed, gift, grant, devise or bequest, and will forever maintain, foster and care for the aforesaid William Smith School for Women, and will maintain the name of its benefactor in connection therewith.

And Hobart College hereby further covenants that, in order to carry out the wishes and plans of the said William Smith in the establishment of the William Smith School for Women, it will provide at such school for a week-day service of an unsectarian character, in which music shall be a prominent feature, and only such simple and generally acceptable public services shall be held in the school. The attendance of the students at such services shall be voluntary, and on Sundays the students shall likewise be free to follow their preferences in regard to religious worship.

And Hobart College hereby pledges itself to carry out, so far as possible, the philanthropic alms and intent of the said William Smith as set out in Schedule “D” annexed hereto.

In WITNESS WHEREOF the said William Smith has hereunto set his hand and seal, and the said Hobart College hath caused its corporate seal to be affixed and these presents to be subscribed by its Secretary and Treasurer, the day and year first above written.

On this 13 day of December, 1906 before me personally appeared William Smith, known to me to be the person described in and who executed the within instrument and acknowledged the execution of the same.

Less building material to be furnished by William Smith $10,000

Ass’t Prof. of Psychology and Mathematics $1,000

Increase of salaries for teaching staff and officers of Hobart College, not to exceed in the aggregate $1,800

The objects of Mr. William Smith’s proposed philanthropy are understood to be the creation of an institution

(1) which shall secure the most important educational advantages to women,

(2) which shall in particular instruct them in all those studies which make for the increase of life, and for the enrichment and utmost ennoblement of the content of life,

(3) which shall secure all these advantages in an atmosphere of complete religious freedom.

In addition to giving young women all the advantages which until now have been given to young men at Hobart, it is Mr. Smith’s desire to give them other, and as he believes, greater advantages. Women are the mothers of the race, and upon them largely depends the character of the men and women of the future. If, in addition to a mental and moral training such as is offered by the regular course at Hobart College, they were given careful instruction in all the laws of life, by which their own physical, mental, moral and spiritual life might be developed harmoniously, not only would they learn to enjoy life themselves, but the effect of such training would result in untold blessing to future generations. It is Mr. Smith’s desire that in his school special lecture courses, and courses of study, should be provided for that purpose, such as Hygiene, Anatomy, Biology, Experimental Psychology and such other studies as tend to a true knowledge of life, and to right thinking and action, to develop and protect life in the students brought under the influence of the School he seeks to fund.

The object of a college course is the attainment of a larger life, through the harmonious development of all the powers with which the student in endowed. This general purpose should in the William Smith School be coupled with the special effort to give its students a knowledge, understanding, and right appreciation of life and the problems of life and of living. Inefficient and incompetent persons are really those who lack fullness of life. They are, so to speak, dead at certain points and in certain directions where they should be alive. To make living men and women should therefore be the object of all college education, and those charged with the government of the William Smith School should stand pledged to pursue this aim by all the means at the command of such an institution. 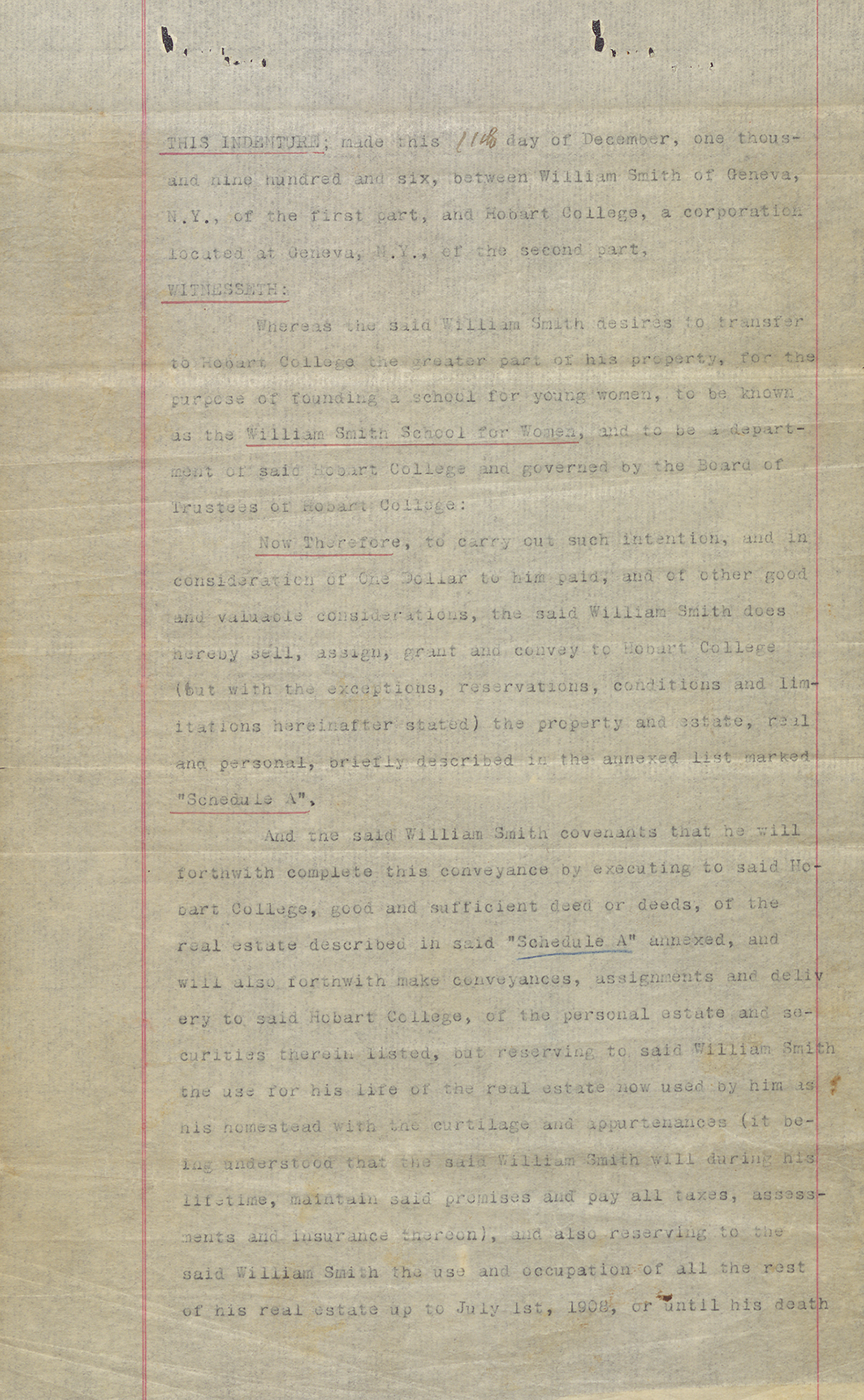 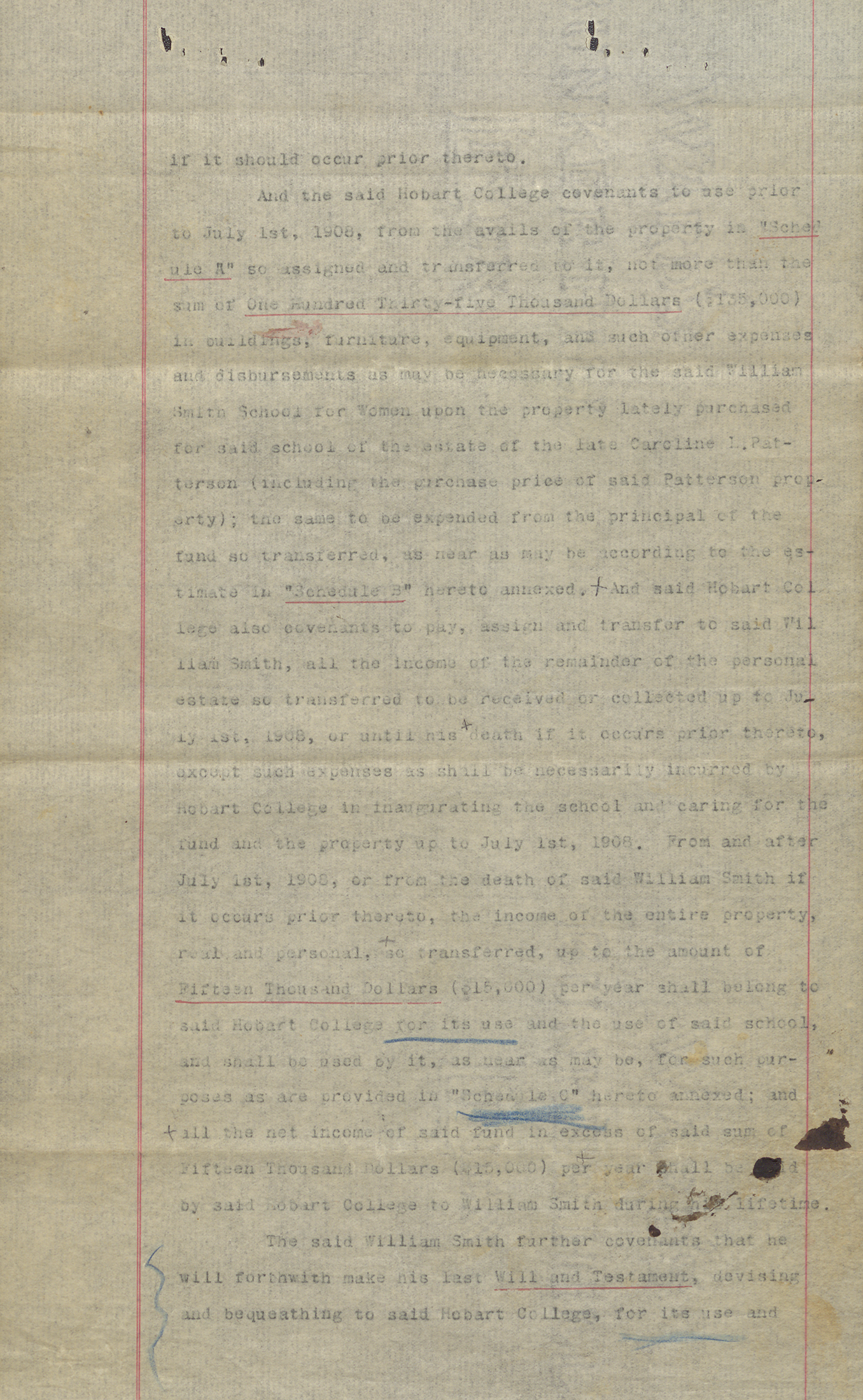 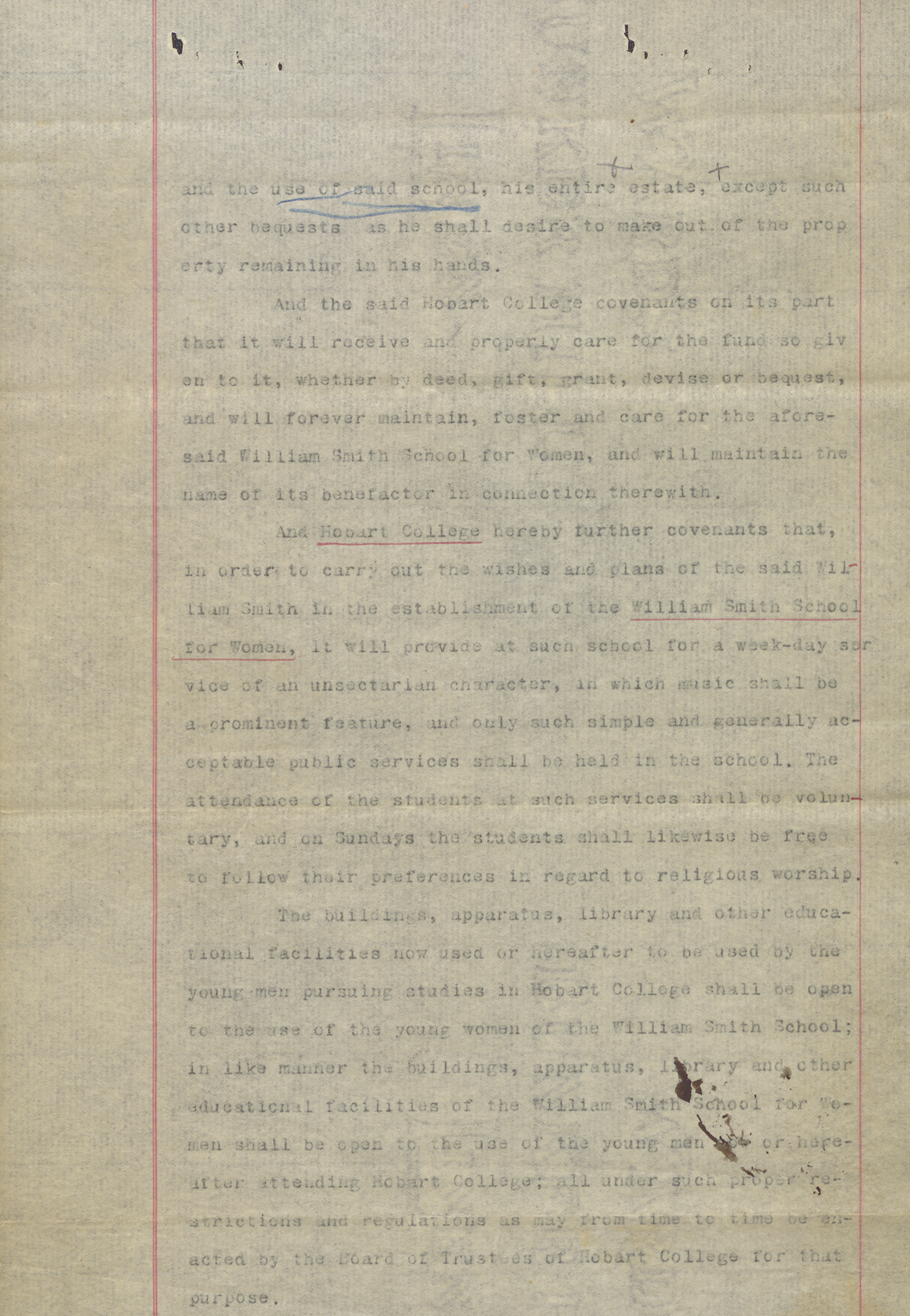 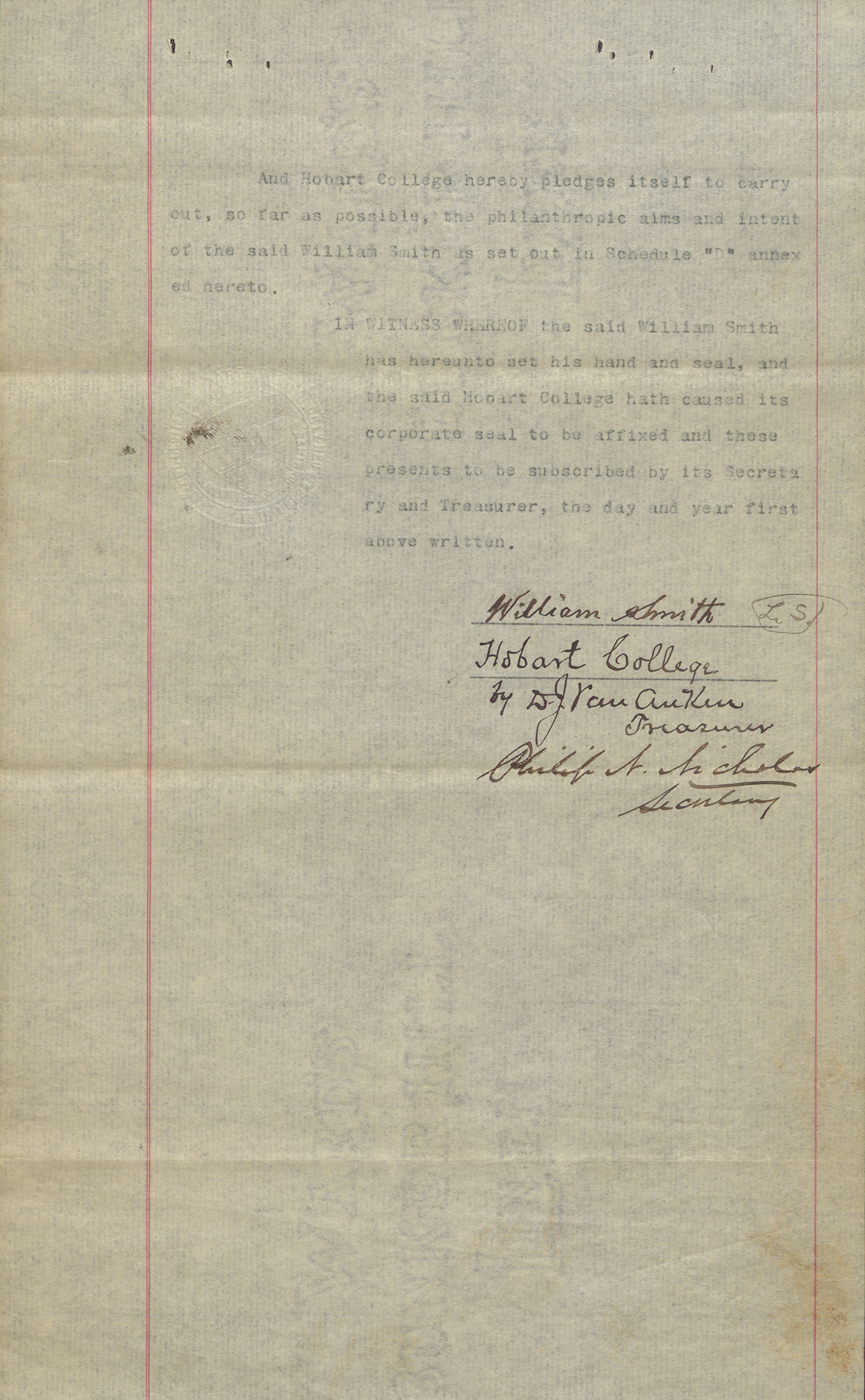 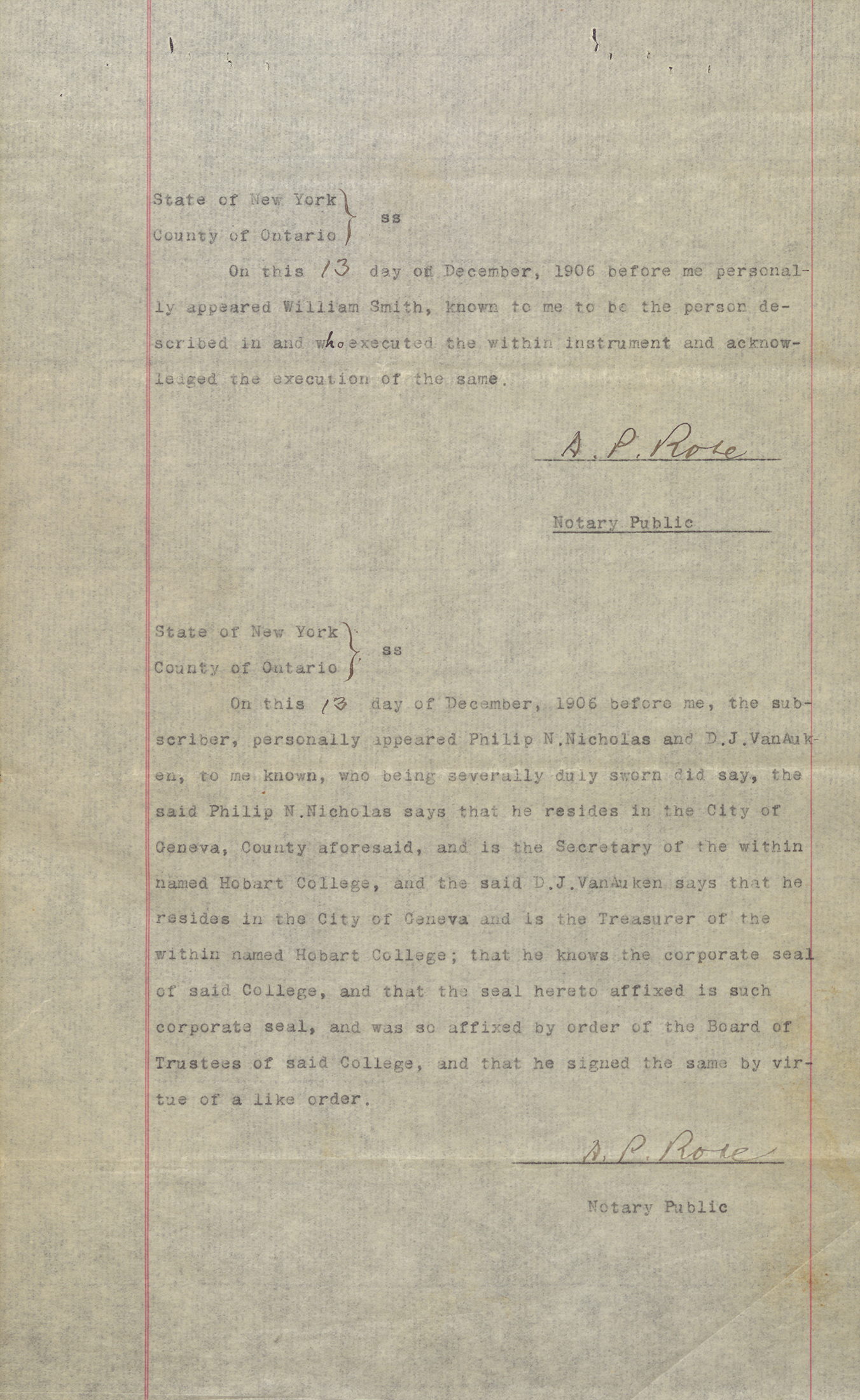 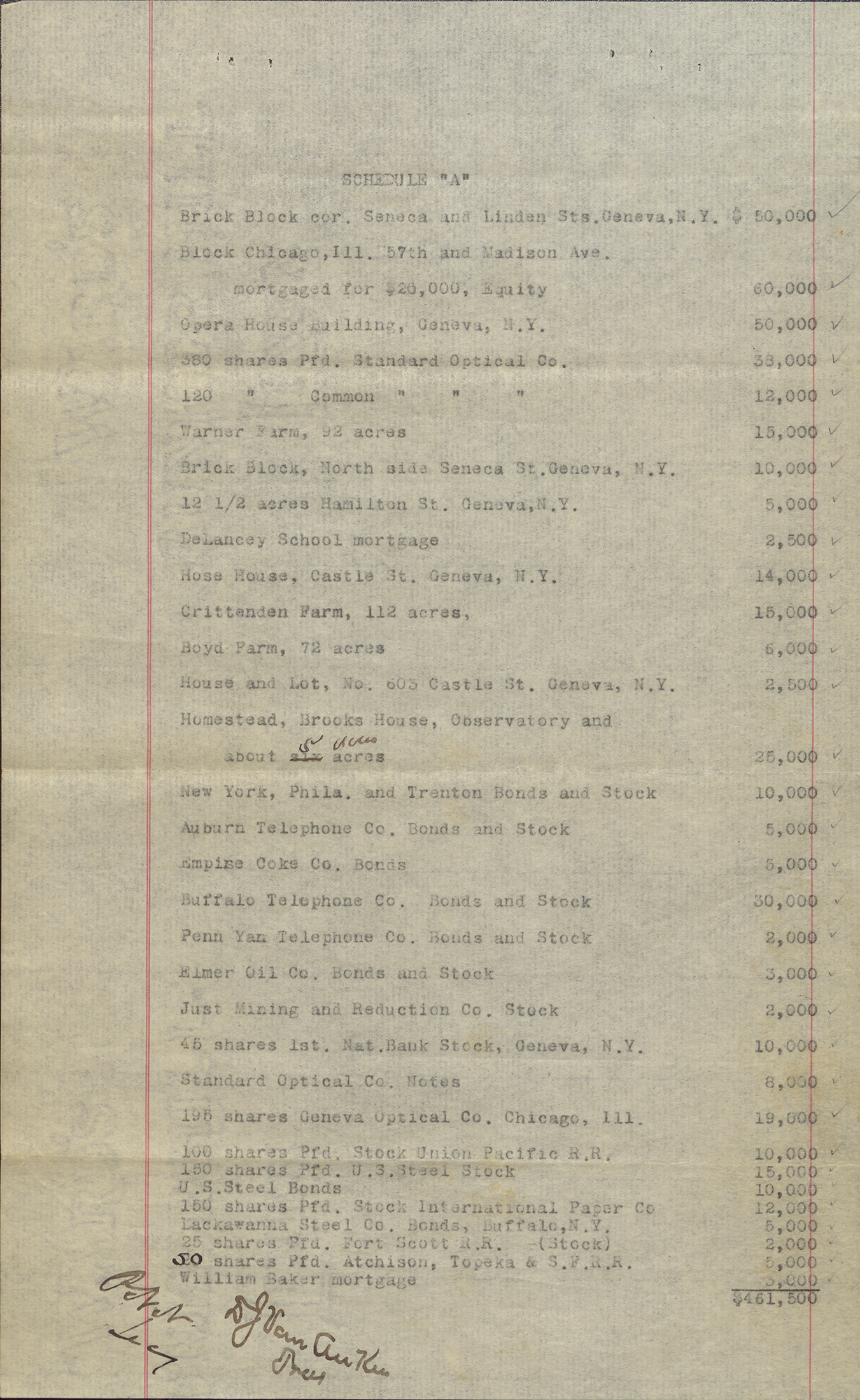 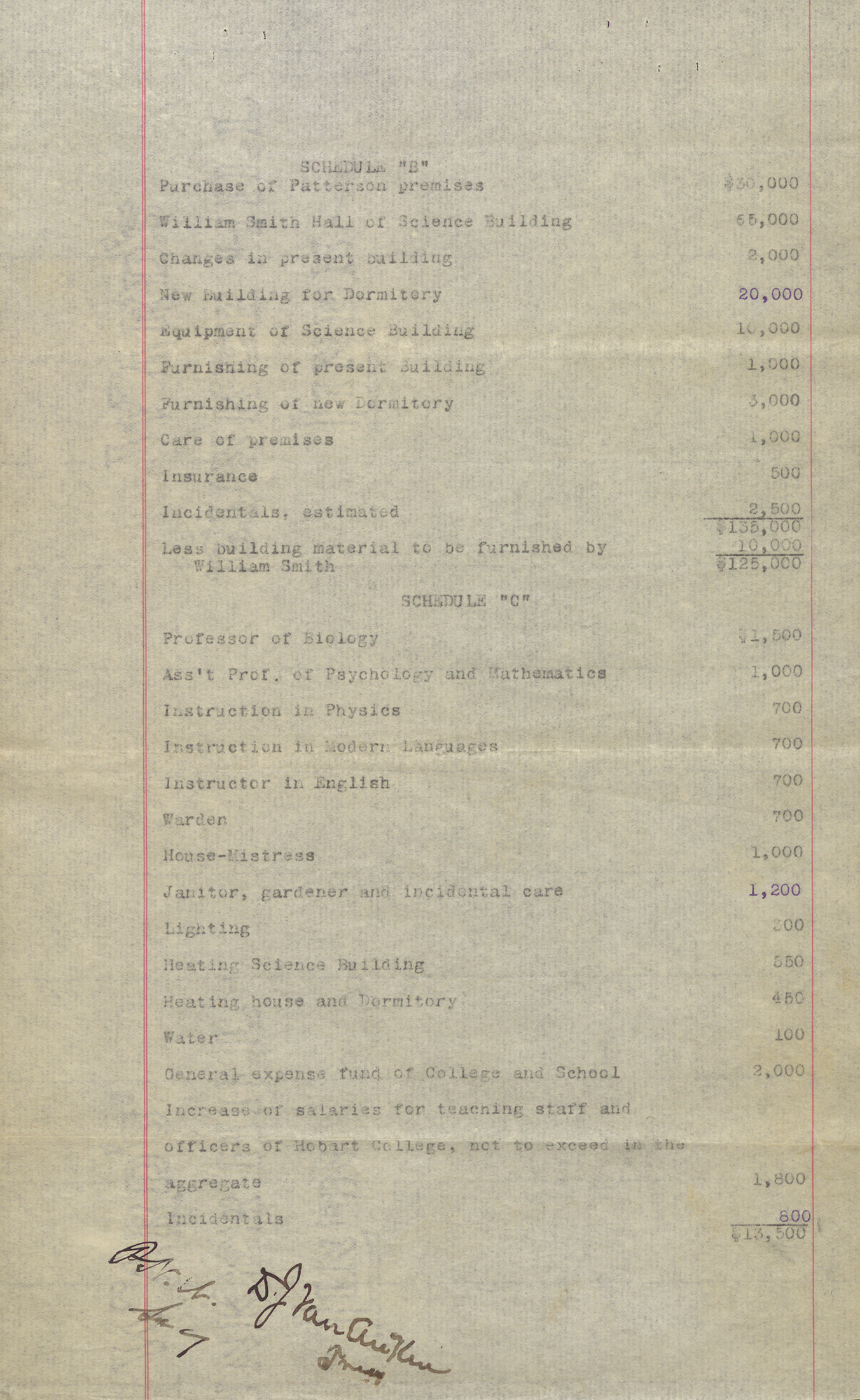 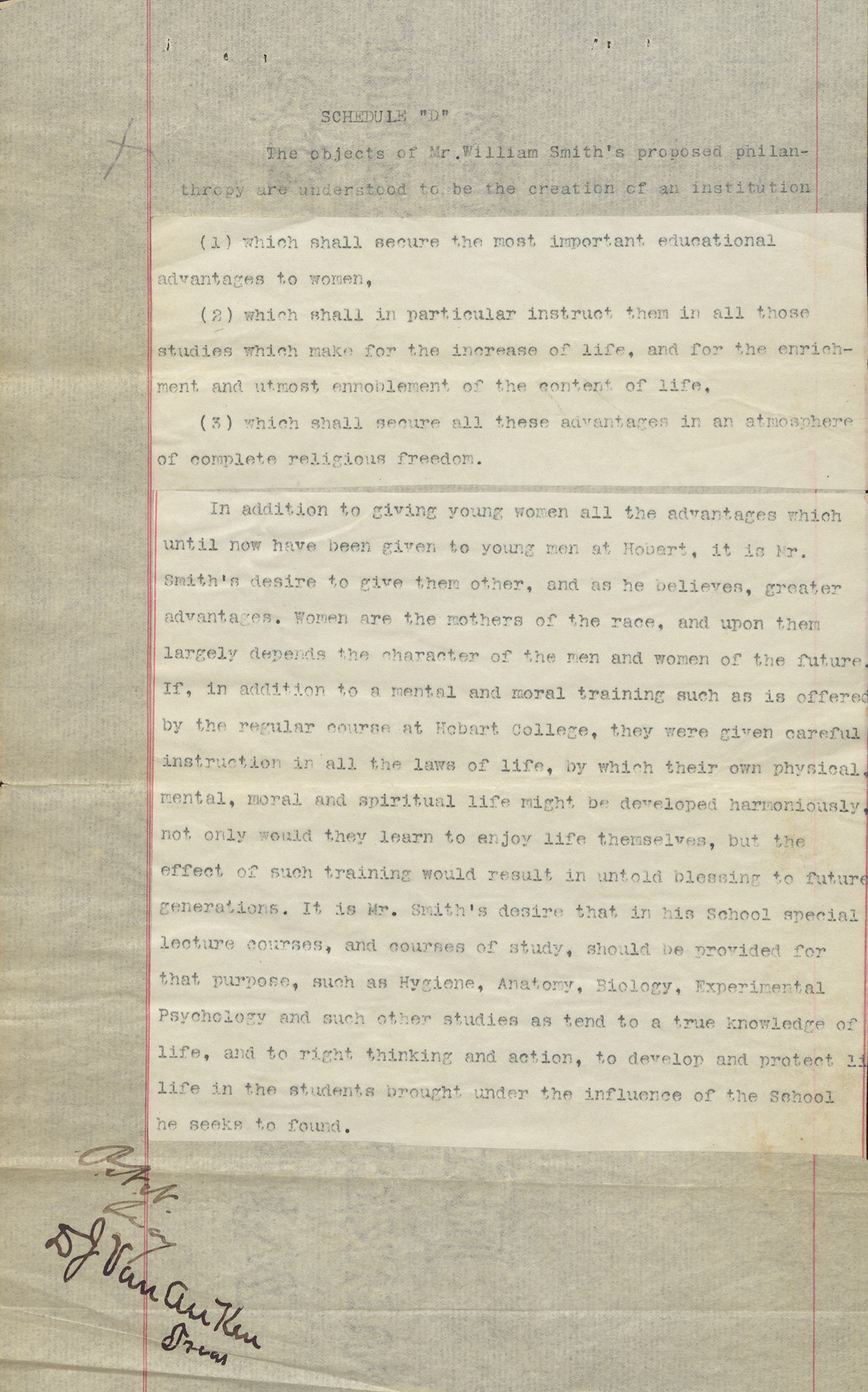 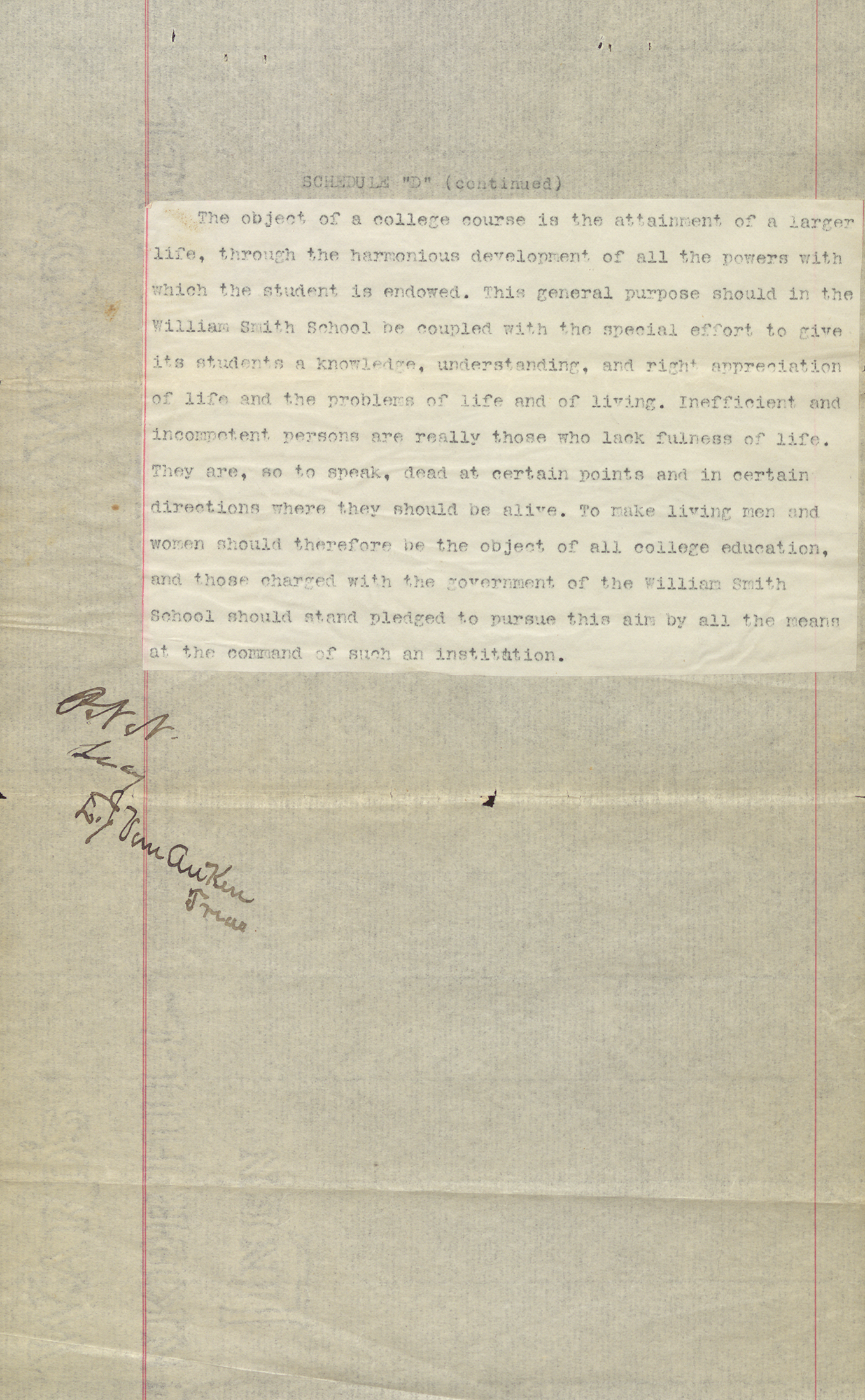